This week was the IoT World Paris forum, a french fair dedicated to connected devices and Sirea had the honor to be awarded during this 6th edition.

Thursday june 30th we received an IoT Award for our SmartEMS EVCI, the energy management system enabling us to control the complex process of recharging multiple electrical vehicles simultaneously.

The entire team is extremely happy to receive this award. We have been developing IoT solutions for many years for the industry and the energy transition, this reward confirms that we are on the right path.

SmartEMS made for electric vehicle charging infrastructure (EVCI) has been designed to solve the issues linked to multiple charging points. It doesn’t only target parking lots and collectif real-estate but also hotels, restaurants and even recreational facilities. Thanks to this device, it is possible to dynamically control loads to prevent companies and communities from upgrading their contracted grid power. It also allows the prioritization of the use of renewable energy sources, such as photovoltaic energy, in order to reduce electricity bills, a major topic to come with the future electrification of the automobile fleet.

Due to the end of thermic vehicle sales in 2035 in Europe, the issue of smart management of electric vehicles recharge becomes crucial for organizations looking to install charging points. A solution like the SmartEMS answers both the issues of logistics and energy transition.

Following the success of our trial project, we started to install the energy management system EVCI for our customers. The last one was installed in mai 2022 in Aveyron (South of France), on the site of SDEL Rouergue, controls to charging points of 22kW each.

Integrated in a AEH cabinet, the Made in France SamrtEMS also manages a 24 kWp photovoltaic shading system as well as a recycled batteries storage of 36 kWh capacity. The managing system makes it possible to fast charge two vehicles at the same time without upgrading the contracted grid power.

To help companies to go further in their IoT strategy dedicated to energy efficiency, we designed on the same idea the SmartEMS AAC for self-consumption control and SmartEMS BAR to assist the management of storage systems with batteries. 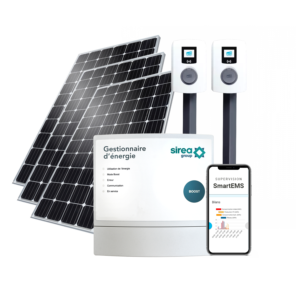 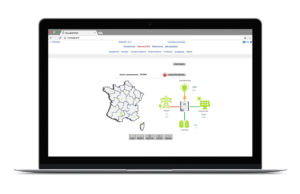